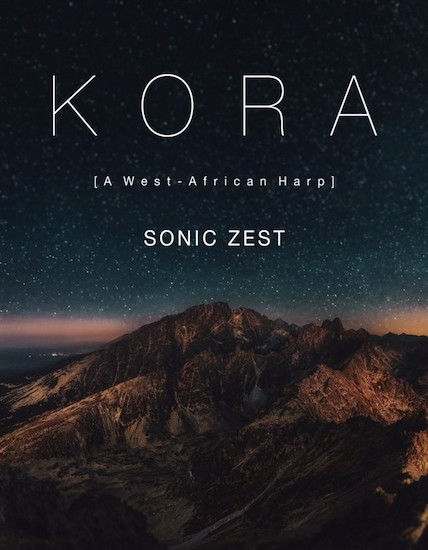 Sonic Zest presents… Kora – a 21-string harp from Mali. This is the only dedicated deeply-sampled Kora sample library available. We spent a freezing cold Friday in January with the renowned Kora player Josh Doughty, meticulously sampling his favourite West African harp in a London studio. There’s literally nothing else that sounds like this.

Note: We updated the GUI after releasing this trailer. It’s much prettier now!

Watch the Kora in action

“The overall effect is quite complex, beautiful and mesmerising… Kora has a beautiful sound which can be anything from punchy to delicate. I can’t fault its sound quality.” – Sound on Sound magazine

About the sample library

Sonic Zest’s Kora is a deeply sampled instrument that uses 6x round robins and 3x velocity layers. As well as the standard finger plucked sound, other articulations include fast tremolos, slow tremolos, glissandos, staccatos, harmonics and trills. The library comes with 9 patches.

The Kora was recorded using both the built-in pick-up and a pair of stereo mics. The user interface allows you to find your optimum mix of the two. A light bit of reverb helps accentuate the sound and bring it all to life.

The Kora is a 21-string West-African harp, that has been played for centuries in Mali, Senegal and The Gambia. The Kora we sampled was constructed by Adam Doughty and is Josh’s favourite to play. It’s made from a calabash gourd cut in half, covered with a Bristol red deer skin, fitted with a Sapele wood neck, fishing line strings and the machine heads used to tune the instrument are from China. Adam Doughty has been making Koras for over 20 years and sells his Koras across the globe (The Kora Workshop).

Josh has been playing the Kora since he was 7 years old. He is a true master of the instrument. He travelled to Mali in 2007 where he was invited to further his studies in the instrument under the world famous Kora master Toumani Diabaté. Josh now travels the world performing and teaching the Kora at festivals, universities and events. He’s great at combining traditional Malian rhythms with modern Western influences. Check out his TED talk.

This is a collection of modern and cinematic textures created from our detailed recordings of the Kora. These sounds are designed for use in film, TV and game music. Use these sounds to instantly create dark apocalyptic experimental atmospheres.

Begin by adjusting the six texture levels until you get a sound you like. These textures range from choral in nature to dark in tone. They loop infinitely. Each texture is a different length so the sound you produce won’t ever repeat, with each pad sound swelling at different points.

You can then place each texture at a different location in the mix using the pan settings. Finally go for a slow attack with a long release drenched in plenty of reverb and sizzle to produce a slowly evolving and morphing pad sound.